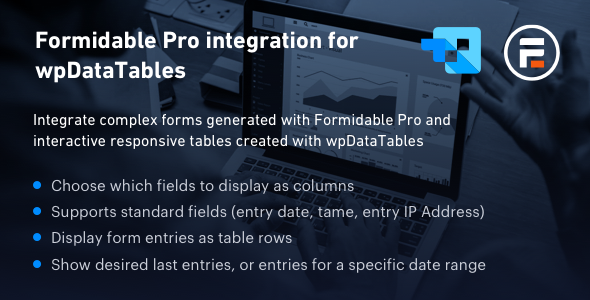 Especially on WpLitt.Com for people of Ashburn.

This addon integrates the wpDataTables, a best-selling powerful table generator tool for wordpress, and Formidable Forms – one of the most popular WordPress form builders.

Upon activating, you will have one more data source available for creating your wpDataTables – “Formidable Form”.

All the form fields will be treated as table columns, and the entries will be displayed in rows.

Please note that you must have one or more entries for a form to be able to generate a table based on it.

See the documentation and tutorial on using the addon on this link.

A minor update with improvement and some bug fixes.

A minor update with a couple of features and bug fixes, and stability improvements:

A minor stability update including some patches for compatibility with WordPress version 5.6 and PHP 8.

A regular update with a couple of small bugfixes and stability improvements:

Especially on WpLitt.Com for people of Ashburn.

© 2021-2022. All rights reserved. WpLitt.Com runs under LAKSHA Firm with registration number 5662/2 in Nasik,Maharashtra,India..